Unfortunately, this is one of those pieces I feel that I should preface with a warning (but in no way an apology). I am unabashedly conservative in my political and social view and beliefs, and this piece reflects a great deal of that. Contrary to current media/political propaganda, that does not make me a racist. I believe the cause of Martin Luther King Jr was just and justified. Sadly, we have veered far from his path and dream. We celebrate the man, but I fear his ideas are dead.

We no longer strive for the pursuit
of happiness, especially not for all men.
No, today we are concerned only
with our own agenda, a compromise
being defined as you agreeing to do things
my way.

“When we let freedom ring, when we let it ring
from every village and every hamlet…

Definitions of Right, Correct, True,
and Freedom become blurred.
We live and argue based on the degrees
of darkness we are willing to accept.

…from every state and every city, we will
be able to speed up …

The murder of a fetus is acceptable,
…the killing of a murderer is not,
personal protection is ostracized,
…protecting criminals glorified,
success and ambition demonized,
…government control of wealth promoted,
religious persecution protested,
…unless the persecuted are Jewish or Christian,
personal responsibility and achievement discouraged,
…dependence and societal blame advocated.

…that day when all God’s children, black men and white men,
Jews and Gentiles, Protestants and Catholics, …

Fifty years ago a great man preached equality
and freedom for all men,
regardless of race or religion. The war still rages,
the battleground has changed;
class is the new race. Now, the black man
is persecuted by his own if he dares to succeed,
the color of his skin irrelevant in the face
of his group association: called Uncle Tom,
uppity, sellout and oreo.

Convince me he would not be crying in the streets,
mourning the bastardization of his dream.

…thank God Almighty, we are free at last.”

The Fine Line Between Madness and Genius

Beware the creative mind
sequestered in his cell —

works of art collecting dust
in corners, crumpled pearls
litter the floor, the air close
and stale. Sticky paint on his
bone-pale skin, dried ink
under nails, bed linen in
disarray, unconcerned with
notions of order or chaos —

on the verge of discovery
or destruction.

Do not knock or call
out his name. The slightest
disturbance can snuff
a filament of genius,
extinguishing an idea
never to be rekindled.

For the Sunday Whirl

She prefers
to be invisible,
slipping through
crowds unnoticed,
the wallflower at every dance,
earth tone clothes and
low heeled shoes.

But, once in a while,
she likes to go about
with red balloons,
knowing she can
escape notice
by releasing the strings,

quietly slipping away
while everyone
watches them fly.

For a prompt at Flashy Fiction, which this really isn’t. Fiction that is, it was done in a flash.

We awoke to ice on leaves,
a slight chill,
harbinger of cold nights,
short days.

The hoarfrost flees from
the rays of first light,
morphing into a morning
drink for the cardinals.

The holly can tolerate
the cold. She, however,
is a creature of warmth.
I watch the red birds

on the lawn while she
prepares to leave.

No words were spoken,
we awoke to ice on leaves.

This week Margo asks for a poem about an ordinary household object…and I got nuttin’. So, I went back to one that I was considering abandoning and worked with it a bit. It is mostly to the prompt. Also shared at dVerse.

It is a horrid excuse

for a houseplant;
never growing,
brown as much as green,
leaves shriveled, withered.

You do not throw
out house plants,
even if only half alive;

and it was given as a gift
at her memorial.

It was given as a gift
at her memorial,

and you do not throw
out house plants,
even if they are only
half alive.

Brown as much as green,
leaves shriveled, withered,
never growing.

It is a horrid excuse
of a houseplant.

She dreams dreams of peace,
pain free periods when joy
reigned. Memories crowd
reality, white walls and machines
replaced by visions of being
naked in paradise.

“Don’t worry,” she tells him.
“The garden is beautiful.”

He carries on, does what
he has always done,
while waiting patiently
for visions of being
naked in paradise.

For Poetic Bloomings, One Single Impression and Sunday Scribblings

We can pretend the drunk
on the throne still bears the
burden of rule,
but the ditch is more often
his home.

Virtue became a burden
and was abandoned
in a forgotten room.
The slow steps of regret
echo through the halls.

A twilight wind bends
the branches of dying trees,
in the diminishing light a
princess whispers a wish
down the courtyard well.

Dawn breaks on a palace
where poetry has died.

For Margo’s Tuesday Tryouts she asked for a poem about a routine, and possibly a form to match the subject matter. My family thrives on routine, and we all get pretty out-of-sorts when it is disturbed. Especially our nights. This might be a little overdone on the ‘form’ aspect, but covers the routine fairly well. Also posted at Poets United and the dVerse Pub.

There is an infant,
restless and fighting sleep,
waiting to be held and rocked.

There is a toddler,
wide-eyed in their bed,
expecting a song in baritone voice.

Nightmares have visited
a little girl, pull back the covers
to let her climb in to fall asleep again.

There are no cries in the night,
the boy is too big to be held close,
the little girl is beyond the comforting age.

But he — almost as big as me —
still hugs me each night, and she — growing
so fast — still kisses my cheek during our nightly routine. 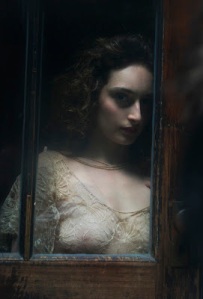 In the shadow of the window
she is the epitome of
…sensuous
………..allure
…………….desire

For The Mag photo prompt. Not sure why it led there…oh well.

With practice, I learned to breathe.

The tumult of beginnings leads
to the clarity of familiarity,
giddy thoughts of youth yield
to the steady step of companions.

Along the way you learn to listen,
to take a breath before speaking,
to let bitterness die undeclared,
to venture forth with no destination.

Years impose their will, gray dominates
the mirror. Still, with the mysteries
of youth deciphered she can awaken
the fire within with merely a look.

With practice, I remember to breathe.